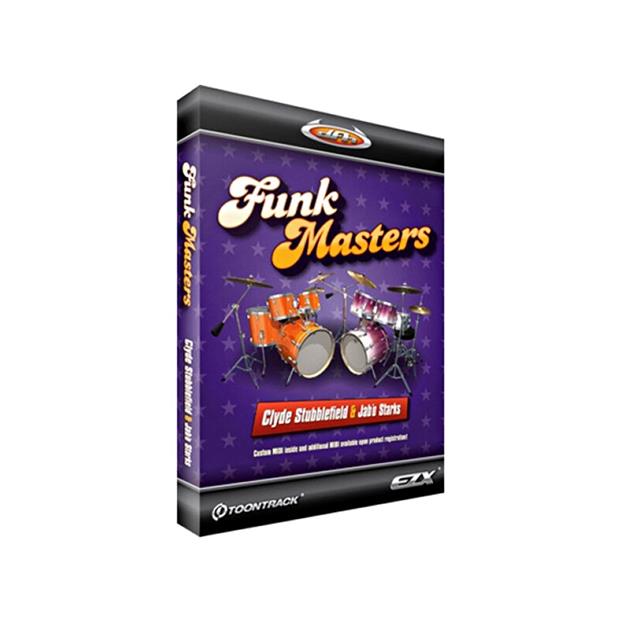 These are unique and exclusive recordings of two of the most important drummers in pop music. Clyde Stubblefield and John "Jabo" Starks. Starks and Stubblefield were both individually and collectively the most important and influential drummers of the Godfather of Soul and Funk - Mr. James Brown. Their time together in Borwn's band has been described by fans and critics alike as the musical pinnacle of funk. Their combined drumming on the double-album classic "Sex Machine" ranks among the most groundbreaking, inspired and funky musical performances ever recorded.

Samples and looped audio of their original grooves, beats and breaks formed the musical starting point and foundation of what we now call hip-hop. The sound of their fill-ins gave rise to numerous sub-genres in the musical realms of underground, pop and experimental music. Most notably, the influence of their breaks inspired groundbreaking new ways of working in the fields of DJing and sample-based music production, making Starks and Stubblefield some of the most influential and sampled drummers in modern music today.

Toontrack Music has sampled both their unique sound and their distinctive and legendary grooves. Musicians, producers and DJs alike will be thrilled by the soulful depth of these samples. From the compact hiss of the hi-hats to the resounding bite of the snares, our unique sample engine reveals the masterful subtlety of these two drummers' playing in a way never before available for music production. The included MIDI files will inevitably be a mainstay of inspiration for a new generation of DJs to come.

The Funkmasters EZX expansion provides two drum set interfaces, one for Clyde and another for "Jabo". In addition, the EZX features effect controls in the EZMixer, a vinyl effect created with the help of the Izotope Vinyl plug-in, and a large plate reverb resampled at Toontrack Music Studios in Umea - everything you need to create typical and real-sounding funk tracks. The Funkmasters EZX extension was produced by Brad Bowden and Mattias Eklund of Toontrack Music.

The code we provide with the invoice must be registered as a new product in the free-to-create Toontrack user account at www.toontrack.com . Afterwards, the complete download of the software is possible directly from the Toontrack user account/product manager. Specifications. The licence code is delivered by email, usually on the same or the following working day. An internet connection is required to download the purchased item from the manufacturer's website.
Technical data

Upgrade
Yes
Yes
No
No
No