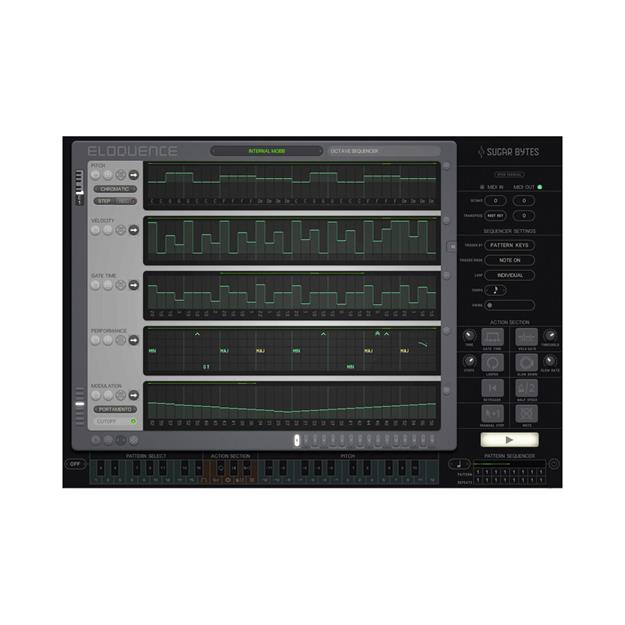 Thesys is an extremely powerful and intuitive midi step sequencer that gives you control over just about every aspect of your favourite midi devices.PitchThe pitch sequencer works relative to the root key and can transpose it by +/12 notes.In scale mode, all entries correspond to the respective scale, which can potentially span several octaves due to the 24 semitones. The note names are displayed in the pitch sequencer. The pitch sequencer has a recording function.LockLock is part of the pitch sequencer and switches off the midi transpose for the selected step.This means that desired notes and chords are retained even when transposed via midi.GateThe gate sequencer determines whether a note is struck and its velocity.MuteThe mute sequencer is part of the gate sequencer and prevents the desired note from being struck.Gate TimeThe gate time sequencer determines how long a note is held. The note can be held up to four times the length of a step.OctaveThis sequencer octaves the note by up to +/- 2 octaves.PitchbendThis sequencer offers 12 pitch bend figures that can be activated on the step.ChordA chord is generated that has the note of the pitch sequencer as its root. There are 6 variations and 4 breaks for minor and major, plus 6 special chords such as diminished and augmented, for a total of 54 chords.BreakOn this step, a multitrigger can be set that triggers at 2, 3 or 4 times the tempo. In addition, the break can be tonally upwards, downwards or constant. A total of 18 figures are available.RandomA random value can be triggered for each of the internal sequencers. Chords can be randomised separately in minor or major to achieve desired harmonic relationships.Action SectionGatetimeThe gate time can be shortened or lengthened as long as the button is pressed.Velo GateThe note is prevented from playing if it falls below a certain value.LooperA portion of the sequence is played in a loop.SlowdownThe sequence slows down until it comes to a complete stop.RetriggerThe sequence restarts when the button is pressed and jumps to its normal position when the button is released.HalftimeThe sequence is played at half tempo as long as the button is pressed.Octave UpThe sequence is played one octave higher as long as the button is pressed.MuteThe entire data stream is muted as long as the button is pressed.SpecialsInternal synthesizer, for screwing on the flySpecial workaround to send MIDI with the AU pluginFull keyboard control via transpose, pattern selection and action sectionPattern sequencerRandom and mutate functions per sequencerIndividual trigger and sync options, swing function The licence code is delivered by email, usually on the same or the following working day. An internet connection is required to download the purchased item from the manufacturer's website.