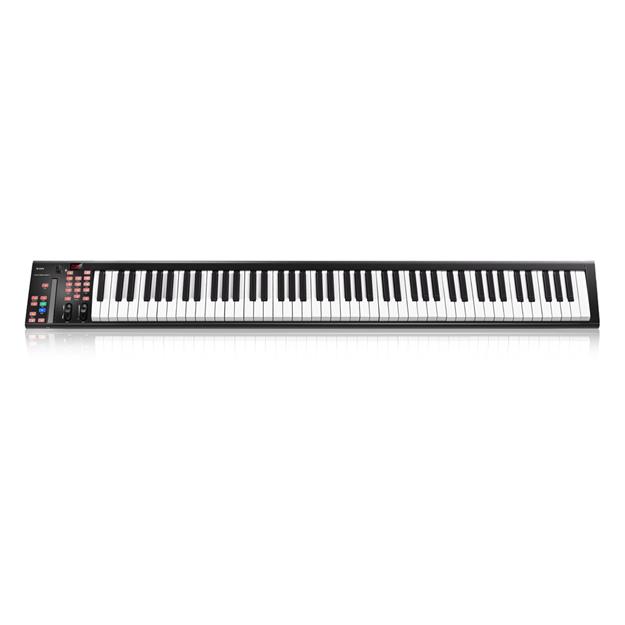 The iKeyboard X series combines an 88-key piano keyboard with a single channel DAW controller in a robust metal case. Unlike many keyboard controllers with small plastic keys, this piano keyboard has been specially designed by Icon with great attention to detail. The full-sized keys are semi-weighted to provide realistic piano action. The controller also features Pitch Bend and Modulation Räder, and Octave and Transpose Up / Down buttons.

The Icon iKeyboard X has all the controls you need right at your fingertips. The controller section features a touch fader with LED feedback for controlling and automating levels and other parameters, as well as mute, solo and rec buttons with track and bank selection. The backlit LED touch fader responds in real time with your DAW. It automatically synchronises with different channel values when switching between channels.

Full transport is provided for playback, recording, looping and changing automation modes. The large rotary encoder with LED ring can be used for panning, setting send levels, controlling plug-in parameters and more. The Icon iKeyboard X comes with Bitwig Studio 8-Track and includes factory presets for the most popular DAWs such as Cubase, Nuendo, Logic Pro, Pro Tools, Ableton Live, Samplitude and Studio One. Every control on the iKeyboard X can be tailored to any MIDI application using the included iMap software. The iKeyboard X uses Mackie Control and HUI protocols for presets and automatic mapping, and can also be configured for common MIDI values. .
Technical data