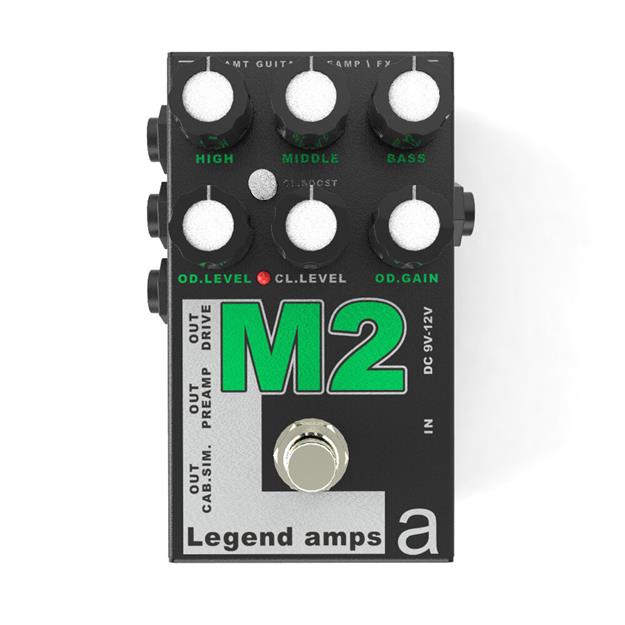 Log in and write a review
instead of: 149.00 €
129.00 €
Sale
incl. VAT plus shipping costs
Not in stock
Add to wish list
Compare item
Questions about the article
Item too expensive?

The beginnings of the Russian effects forge go back to the early 1980s, when the passionate musician and electronics expert Sergei Marichev got his hands on a Mini Moog and simply copied it due to a lack of purchase opportunities. After all, the Soviet Union was in international cultural, economic and political isolation. The Cold War was raging and the world was on the brink of nuclear war. Maritschev was not deterred, he concentrated more and more on developing effect devices, which was not an easy undertaking in the restricted military area of Omsk. It was only at the beginning of the 1990s, after the collapse of the Eastern Bloc, that he was able to think about marketing his products. The story is extremely exciting and can be read on the English version of the AMT website.Today, AMT (Asia Music Technologie) is no longer an insider tip. Pedals such as the M2 Overdrive bear witness to the wealth of ideas and the well thought-out conception of the products. The preamp can be used both as a "normal" distortion unit and as a recording preamp. The M shows the direction - Marshall, English. And the Mine does that very well. Especially the preamp output was pleasing in the test, but the speaker simulation is also impressive. The spectrum ranges from slightly to moderately distorted sounds like Hendrix or Stevie Ray Vaughan to the full-bodied Australian style of Angus Young.Special feature - all three outputs can be used simultaneously. Conclusion: Workmanship, conception and sound are absolutely coherent. Specifications